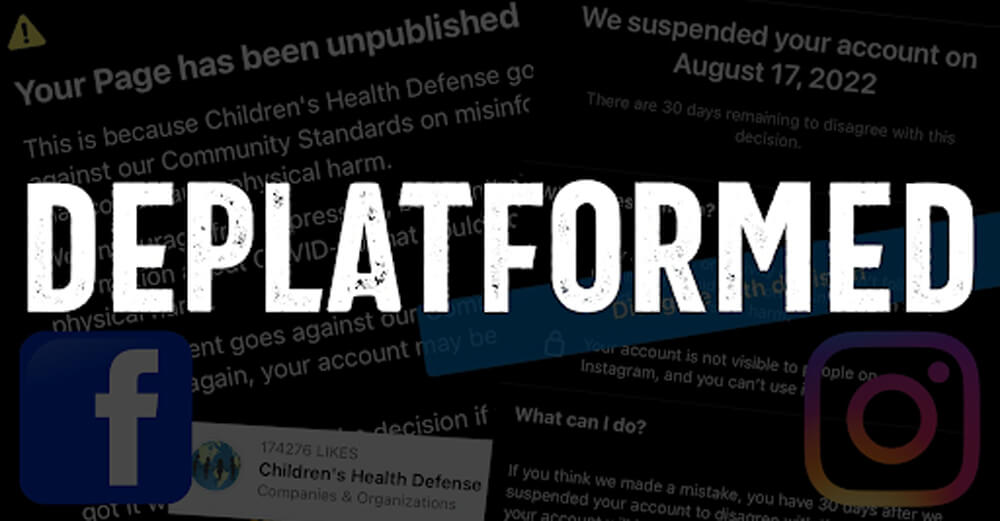 On Wednesday, Aug. 17, without warning, Facebook informed Children’s Health Defense (CHD) that their page was deplatformed (unpublished). Simultaneously, their Instagram account was deplatformed (suspended). Each of these platforms had hundreds of thousands of followers. Collectively, more than half a million followers have been denied access to truthful information. They received the following notifications from both platforms:

Despite not posting content on Facebook for the past 21 days due to an existing 30-day ban, and constantly self-censoring their content in an attempt to avoid continual shadow-banning and censorship, both pages were abruptly deplatformed. Removing CHD accounts is evidence of a clearly orchestrated attempt to stop the impact they have during a time of heightened criticism of our public health institutions.

Deplatforming by the tech giants came days after the Centers for Disease Control and Prevention (CDC) quietly walked back many of their previous COVID-19 policies that CHD has criticized since the beginning of the pandemic. Within hours of CHD deplatforming, CDC director Dr. Rochelle Walensky shared her plans for overhauling how the agency works while admitting to a flawed response to the COVID-19 and pandemic missteps.

There’s no clear indication of why Facebook and Instagram chose to deplatform the CHD at this time, but the timing dovetails with our ongoing censorship lawsuit against Facebook. CHD filed a lawsuit against Meta, which owns Facebook and Instagram, in August, 2020. Recently, in its Ninth Circuit Court appeal filed on July 29, CHD provided the court with CDC-produced documents the agency shared with Facebook. These documents, provided to Facebook on a regular basis, contained what the CDC considered misinformation. Titled “COVID Vaccine Misinformation: Hot Topics,” the CDC documents asked tech giants to “be on the lookout” (BOLO) for various topics they consider to be misinformation including: COVID-19 vaccine shedding, VAERS reports, spike protein data and more. The CHD case is currently pending in a Ninth Circuit decision.

“Facebook is acting here as a surrogate for the Federal government’s crusade to silence all criticism of draconian government policies. Our constitutional framers recognized this peril of government censorship. We don’t need a First Amendment to protect popular or government approved speech. They incorporated the First Amendment specifically to protect free expression of dissenting opinions. They understood that a government that can silence its critics has license for every atrocity.”

Despite attempts to censor CHD, they will continue their important mission. Many people only followed them on these large social media platforms so it is important to let them know they have been deplatformed. Please share all or parts of this email with your friends and family so they can sign up for the free newsletter, “the Defender,” and watch the censorship-free shows streaming live daily on CHD.TV. Right now, email is the most reliable way to stay in touch.

Don’t miss this critical information and content! Children’s Health Defense can also be found on Twitter, Telegram, Rumble, MeWe, Parler, Gab, Gettr, Reddit, Bitchute, TikTok and Sovren. Follow them on these platforms and spread the word with others to do the same.