Open Letter About Democracy and Mindfulness 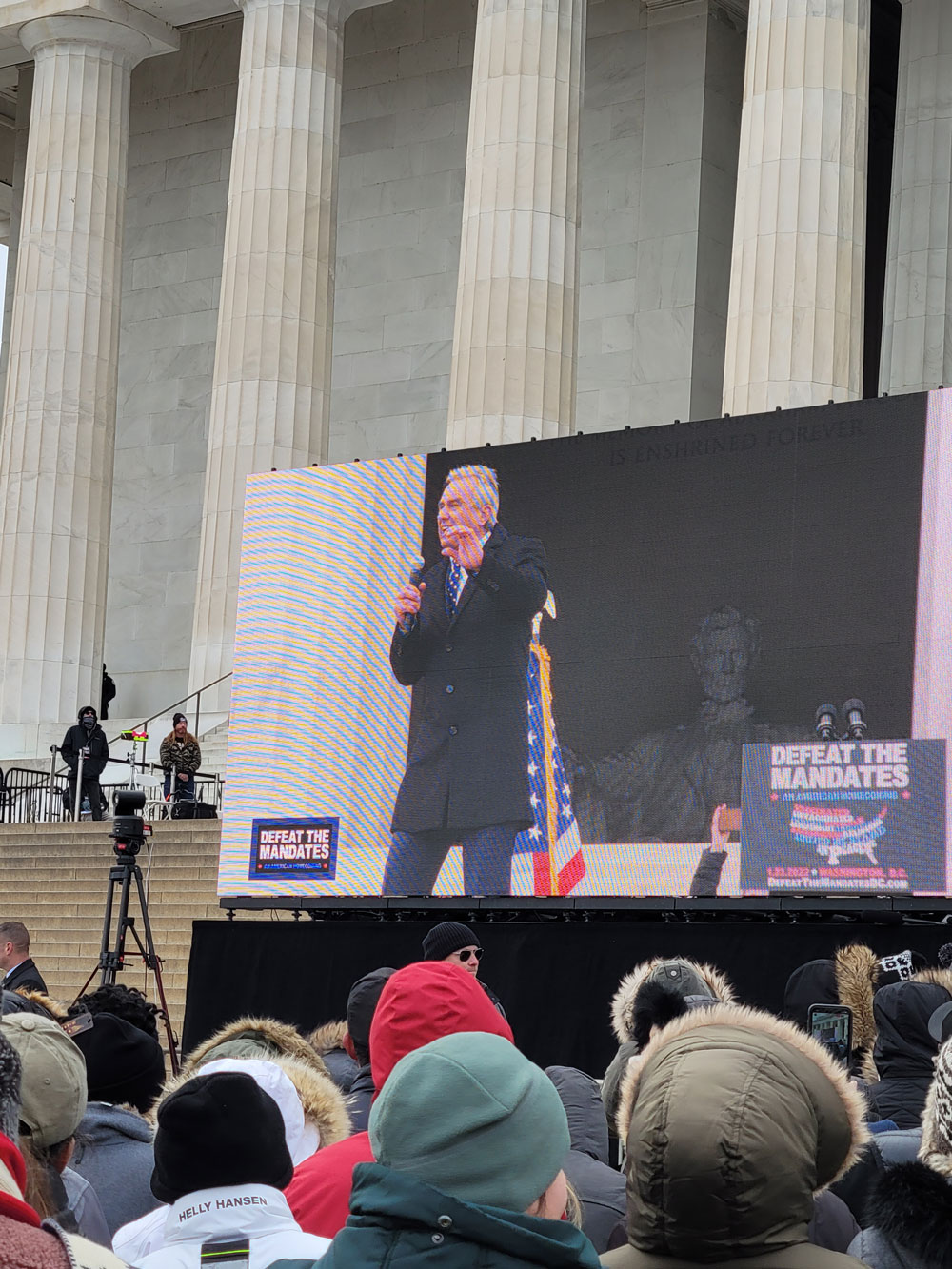 The powerful entities who control the media are afraid of one thing. People coming together. The Defeat the Mandates protest in D.C. was a coming together that has these folks concerned. The efforts to divide and conquer are so blatant now that even Government is publicly calling for censorship. The acting United States Surgeon General has called for Joe Rogan’s podcast to be censored. Rogan interviews some of the brave doctors and scientist who have been analyzing data and peer reviewed articles from around the world and disseminating the painful failures of government health policies. With 11 million registered to listen to Joe Rogan disseminate scientifically valid information, more than double the numbers watching CNN, the reason couldn’t be clearer. This call for shutting down speech should be frightening the hell out of the group that have the most fire power, the lawyers. Regardless of who you believe, this should frighten all of us and catapult us into action. Immediate, peaceful action.

Democracy is under attack.  With no due process, a million businesses were shut down when the pandemic first arrived.  With no due process or legislative action or amendment to our constitution our right to assemble, right to our religious freedom, and guaranteed right to jury trial have been subverted.   This may be the biggest test of our Democratic way of life and the strength of our Constitution our Country has every encountered.   The amount of fear being peddled by the media narrative dictating by Corporate and Governmental interest, is causing confusion, poor decision making and assaulting our populations already tenuous state of mental and physical well-being.   Insurance industry statistics reveal an unexplained 40% increase in all mortality deaths since the pandemic in working aged people.   Our children are suffering up to a 20 point decrease in Intelligence Quotient testing because of isolation and mask wearing and fear.   Worse, young children are committing suicide and turning to intoxicants.     The long-term consequences of any policy driven by fear is beyond comprehension for most.

Last weekend in Washington D.C., approximately 20 to 30 thousand people gathered peacefully at the steps of the Lincoln memorial to protest the mandates and to protest the corporatization of medicine.    Doctors from all over the country spoke about the stifling impact of corporate dictates that prevent Doctors from being Doctors.   Jew, Christians and Muslim, Doctors, Firefighters, and professional athlete speakers united on the steps to speak of the harms occasioned to their people.  Many recounted the remarkable work of Martin Luther King who stood where they stood to denounce the prevailing laws of the day.   The media, who were perched high above on a platform atop thirty feet of scaffolding were met with chants, “Do your job, do your job”.   Unfortunately, what most of the media did was to ridicule and demonize the event.   Robert F. Kennedy, Jr. gave a passionate speech and paid a heavy price for using an analogy that offended many and led his own family and wife to denounce that part of his speech.

I met many people who traveled from the Midwest and further to attend this one-day event.  People from all walks of life and differing political beliefs and affiliation. One engaging person told me that a peaceful protest is more than twice as likely to succeed than a violent one. She also said something I had never heard and found encouraging.   It takes just 3.5% of a population to bring about change.  With just a small fraction of the people in a society actively participating in protest and activism, serious political change is ensured.

The disinformation in our media and the Oligarchy that has become our “main stream” media has been delivering Napalm bombs on public discourse, and the exchange any idea that does not swim with the stream.   I have always been amazed and humbled by the power of salmon.   We have all seen the journey salmon make to swim up stream to get to the breeding pools where they die after struggling to bring the next generation to life.   It seems to me we are in such a struggle.   One we owe our children and one we must make to honor our ancestors who traveled across continents on foot, lived outdoors and hunted for food that was also hunting for them.   We have become so soft and so scared that we are easy to manipulate and divide.   The disinformation and wrong information contained in the very powerful stream washing over us constantly is not designed to preserve our culture, or better it.  It is not intended to bring the people together.  It is not a stream of information that has any real compassion or love in it.  Impeccably credentialed scientist and doctors who are caring, hones and risking their careers to swim against the stream are being attacked with smear campaigns.   Oppressor opinions rarely resort to the “science” that proves these people wrong, but instead discredit with innuendo or outright hate speech.    Many are too afraid to realize what is happening and go with the narrative without critical thinking and debate.   They are attached to their version of an island of safety in those beliefs.    I have realized that you cannot tell someone in the steam that it is toxic, you just must show them you care for them and will love them no matter what.   You can point out that there is information available that reveals the dangers in the stream but let them come to that information without explaining it or telling them what it says.   If we loose friendships, distance ourselves from family or are unable to consider all opinions, the oppressor wins every time.   Hate is a sure looser.

The powerful entities who control the media are afraid of one thing.   People coming together.   The Defeat the Mandates protest in D.C. was a coming together that has these folks concerned.   The efforts to divide and conquer are so blatant now that even Government is publicly calling for censorship.  The acting United States Surgeon General has called for Joe Rogan’s podcast to be censored.    Rogan interviews some of the brave doctors and scientist who have been analyzing data and peer reviewed articles from around the world and disseminating the painful failures of government health policies.   With 11 million registered to listen to Joe Rogan disseminate scientifically valid information, more than double the numbers watching CNN, the reason couldn’t be clearer.   This call for shutting down speech should be frightening the hell out of the group that have the most fire power, the lawyers.   Regardless of who you believe, this should frighten all of us and catapult us into action.  Immediate, peaceful action.

Many of you have heard of Thich Nhat Hanh (Thay-teacher), a Zen Buddhist Monk who died last week at age 95 at his root temple in Vietnam.   He became a monk at age 13 and has been a peace activist his entire life.   Yesterday, at one of the Monasteries he established in the United States, Blue Cliff, I sat in a chair in the cafeteria, facing a wall.   Directly in front of me was a photo of Thich Nhat Hanh and Martin Luther King taken in 1966.   The two spoke out against the Viet Nam war and King nominated Thay for the Noble Peace Prize.   For those interested, King’s letter can be found on the Plum Village web page.  www.plumvillage.org.  As I reflected on the picture and the fact that I had just been to Washington where King’s legacy revealed its might, it occurred to me that no matter your good intentions and desire for change, action is required.  This letter is one of my actions.   Thay taught interbeing, the concept that the idea that there is an “individual self” is an illusion.   We are made up of non-human substances.   Water, Oxygen, hydrogen, nitrogen, carbon, calcium and phosphorous primarily.  We are made of the stars and the sun and the elements on earth.  The same applies to anything.  A flower is made of non-flower things.

Please consider finding your Buddha nature and take that into the world.  Martin and Thay showed us the way.  It takes courage to speak out with opinions that frighten others or may be unpopular.  If the lawyers, the magician archetype, with our magic language and understanding of the documents that our freedoms rest upon don’t speak up, who will?   Should we speak out against Corporate medical policies that prevent Doctors from being Doctors?   Would it be right to question the shut down of Court’s and lack of will power to quadruple efforts to make up for what the injured and oppressed have lost in the last two years?   Should we think deeply about mandates and what penalties and restrictions not yet designed or implemented may restrict our freedoms in the future.   Would it be wise to consider the right of every person to have the ability to be fully informed and provide consent before agreeing to a foreign substance in their body?

Whatever you believe, it seems prudent to consider how Buddhism speaks about two levels of truth:  the level of labels and appearances, often called “conventional truth”, and the deeper level of reality known as “ultimate truth.”   “If we are going to help our society and the planet, we need to wake up to what is going on at both levels of truth” Thich Nhat Hanh, Zen and the Art of Saving the Planet, 2021.   If we learn to do this and teach others, we will find that the only fact check we will ever need is what comes from ultimate truth.   The exact form of knowing that our ancestors used long before any newspaper, radio, tel-a-vision or internet, and the ultimate truth they used to cross the continents on foot, survive outside and hunt for animals that were hunting for them too.  A knowing that rests in interbeing and the courage to put that into action, will change the world.